The Tomb of the Unknown Soldier is located at the bottom of a high wall surrounding the Parliament Building. On this wall is a relief that depicts a fallen soldier and it is surrounded by quotations from the famous Pericles' Funeral Oration.

It is currently one od the most important sites in Athens. The main element of the monument is a large bas - relief representing a dying Greek heavily armed soldier, by Kostas Demetriadis. This is based on the dying nude hoplite in the east pediment of the early 5th - century BC temple of Aphaia on the island of Aigina in the Saronic Gulf.

To the left and right are further inscriptions that tell of historic battles where Greek soldiers took part, the most recent one in Cyprus in 1974.

The monument was unveiled on 25 March 1932 during the last government of Prime Minister Eleftherios Venizelos. It is guarded 24 hours a day by two Evzones, members of the Presidential Guard, an elite specially-chosen unit of the Greek Army.

Evzones (meaning well-dressed) were created by King Othon to serve as the personal guard of the royal family. Their uniforms are based on a traditional 19th - century style costume form southern Greece. The red Ottoman - style felt cap symbolizes the bloodshed in the revolution against Ottoman occupation, or the Struggle. Its black tassels stand for the tears of the Greeks shed during 400 years of Ottoman rule. The 400 pleats of the kilt equal the number of years the Greeks were enslaved.

The monument is used as a backdrop for two important national holidays each year in Athenian and in Greek life.

The change of Guard 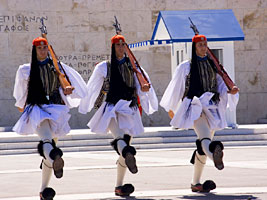 Every hour, Evzones perform "the change of the guard" in the Tomb of the Unknown Soldier. The ceremony begins when fresh soldiers march down Vasillis Sophias Σtreet from their barracks at the edge of the National Gardens, arrive at the Square and stand waiting to take their fellow soldiers place.

The guards who have until now remained motionless, begin a routine of stomping, swinging their limbs and marching in unison, possibly to get the blood circulating again. When they finish, the new soldiers complete the same ritual before taking their places at either side of the Tomb. In 15 minutes, the exchange is complete. The tired soldiers march back to the barracks for a well-deserved rest.

The 11 o’clock a.m. Sunday changing of the guards is a more ornate ceremony, where scores of people gather to watch.

The Evzones and the way of life they represent, may be one the most important reasons why Greece is privileged with so great touristic activity.

You may also see them up close, by getting a ride around Athens with our train!