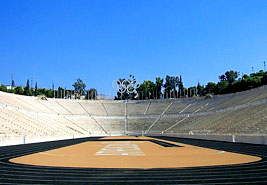 Panathenaic or Kallimarmaro Stadium is was a small valley that was transformed into a stadium by Lykourgos in 330-329 BC for the athletic competitions of "Panathinea", the greatest festivities in ancient Athens.

Between 140 and 144 AD, Herodes Atticus restored the Stadium, giving it the form that was found at the 1870 excavation: the horseshoe construction with a track 204.07 meters long and 33.35 meters wide. It is believed that the Stadium had a seating capacity of 50,000 people.

The modern times restoration of the Stadium was conducted by G.Averof at the end of the 19th century, for the first Olympic Games that were reborn in 1896. The Stadium was rebuilt with marble from Mt Penteli, the same kind that was used 2,400 years before, for the construction of the Parthenon on the Acropolis. It could now hold over 60,000 spectators.

This stadium hosted the 1st Olympic Games of the modern era, in 1896 as well as the final of archery and the marathon race finish in 2004 Athens Olympics (following the tradition of the 1st Olympics).

The Stadium and the Marathon 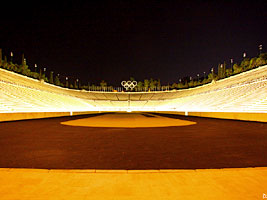 The Stadium is the finishing point for the contemporary Marathon race which was held each October. This is a modern reenactment (first held during the inaugural modern Olympic Games, staged in Athens in 1896) of the run of the Athenian hoplite (heavily armed soldier) Pheidippides who, in 490 BC, sped from the battlefield at Marathon in northeastern Attica, where the Athenians and their allies the Plataians had just defeated the superior forces of the Persian King Darius to announce to his fellow citizens that the victory was theirs.

He then died immediately from exhaustion. The official distance of the route from the ancient bridge at Marathon to the Stadium is 42.2 km (26.2 miles), which was codified for the 1924 Olympic Games held in Paris.

In more recent years this stadium has been often used to honour the homecoming of victorious Greek athletes, most notably the Greek national football team after its victory at the 2004 European Football Championship and also the opening ceremony of the World Athletics Championships in 1997, on a concept by composer Vangelis Papathanasiou.

Athens Happy Train visits the Panathenaic Stadium on its roundtrip through the most important sites of the historical centre of Athens.