Which are the best destinations near Athens?

Well, without doubt... the ones in the center of the city, of course!

Hop on the Athens Happy Train and enjoy an amazing tour, around the historical monuments of Athens, such as Zappeio Hall, Monastiraki, Plaka or the Ancient Market. Learn, where all the important monuments or museums are located, find the nearest hotels on Syntagma square, or its surrounding areas, and make the most of your visit in Athens, by transforming your tour with Athens Happy Train, into a pleasant field trip.

All this, wouldn't be possible without the happiest hop on hop off train in the city. 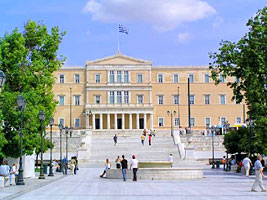 Enjoy a tour around the Hellenic Parliament, as well as other interesting sites, important parts of the Greek history, just by hopping on our Happy Train. The one that looks like a toy! Do some sightseeing around the sites of the historical centre of Athens, along with your family or your friends. Throughout this beautiful ride, our host will show you around the specifics of the tour, giving you access to the secrets of ancient Athens.

The building, a neoclassical three-floor structure designed by Friedrich von Gärtner and completed in 1843, originally served as a palace for the Greek monarchs. Members of the royal family continued to reside there until 1924, when a referendum abolished the monarchy.

Although during the Greek Revolution a number of National Assemblies had been held, the first national parliament of the independent Greek state was established only in 1843, after the September 3rd Revolution, which forced King Otto to grant a constitution.

The Parliament was housed in the Old Parliament House, on Stadiou Street, from 1843 to 1854 and again from 1875 to 1932. The current building originally served as a palace for the Greek monarchs. After suffering fire damage in 1909, it entered a long period of renovation. Members of the royal family continued to reside there until 1924, when a referendum abolished the monarchy.

Although the monarchy was restored in 1935, the building has housed the Parliament ever since. The Tomb of the Unknown Soldier, guarded by the Evzones of the Presidential Guard, is located in the formal forecourt of the building.

The main Chamber of the Parliament 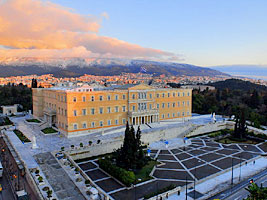 It is located on the ground floor, is amphitheatrical in layout, and is panelled in purple and purple-veined white marble with inlaid gold ornaments. Seating for the MPs is arranged in five circular sectors.

The Speaker's Chair, the lectern, the ministerial and state functionary benches, and the stenographers' vault are made of carved wood and are laid out facing the MP seats.

A colonnaded balcony surrounds the upper tier of the Chamber and is used as the visitors' gallery. Part of it served as the Royal Box in the past. A vitrail roof provides natural light during daytime.

An almost identical, but smaller-scaled, Chamber was originally built in the second floor for use of the Senate. Since there has not been a Senate for several decades, this Chamber has no official function any more, and is used for party caucuses and other parliamentary or party functions on an ad hoc basis.

Improvements are ongoing, some of them significant (such as the addition of an 800-vehicle underground parking structure), to ensure that the building can continue to function effectively.

What happens in the Parliament 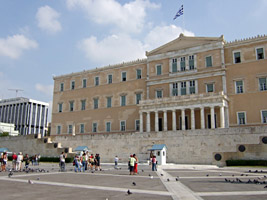 Democratic procedures. The Greek Parliament has 300 members, elected for a four-year term by a system of 'reinforced' proportional representation in 56 constituencies, 48 of which are multi-seat and 8 single-seat.

Seats are determined by constituency voting, and voters may select the candidate or candidates of their choice by marking their name on the party ballot. However, the party receiving the largest number of votes receives 40-seat premium, which is filled by candidates of that party not declared elected on the lower rungs (the constituencies).

Members of Parliament are immune from criminal prosecution, arrest or detention while in office, but not for civil suits. They are also immune from having to provide any information to any authority regarding their legislative functions and deliberations.

Law in the making

The Greek Parliament in Athens, votes for a Bill to become Law in three voting sessions: firstly in principle, then per article (when amendments may be proposed and either approved or rejected) and then as a whole. A "simple" (50% plus one) majority is sufficient for any such vote to pass. Once the bill is passed, it is sent to the President of the Republic to promulgate and publish in the Government Gazette. The countersignature of the appropriate government minister(s) is required.

What you will see in the tour

During the hop-on/hop-off tour, Athens Happy Train passes by the Hellenic Parliament, which is guarded by the proud corps of Evzones. Every half an hour, they engage in a disciplined and proud ceremonial pacing, paying all due respect to the monument of Unknown Soldier. The building is ornamented with marble and carved designs, reminiscent of the tradition indigenous to ancient Greece. A dominating structure that prevails through the beautiful garden surrounding it. Just as ancient Greeks preferred to construct their buildings.