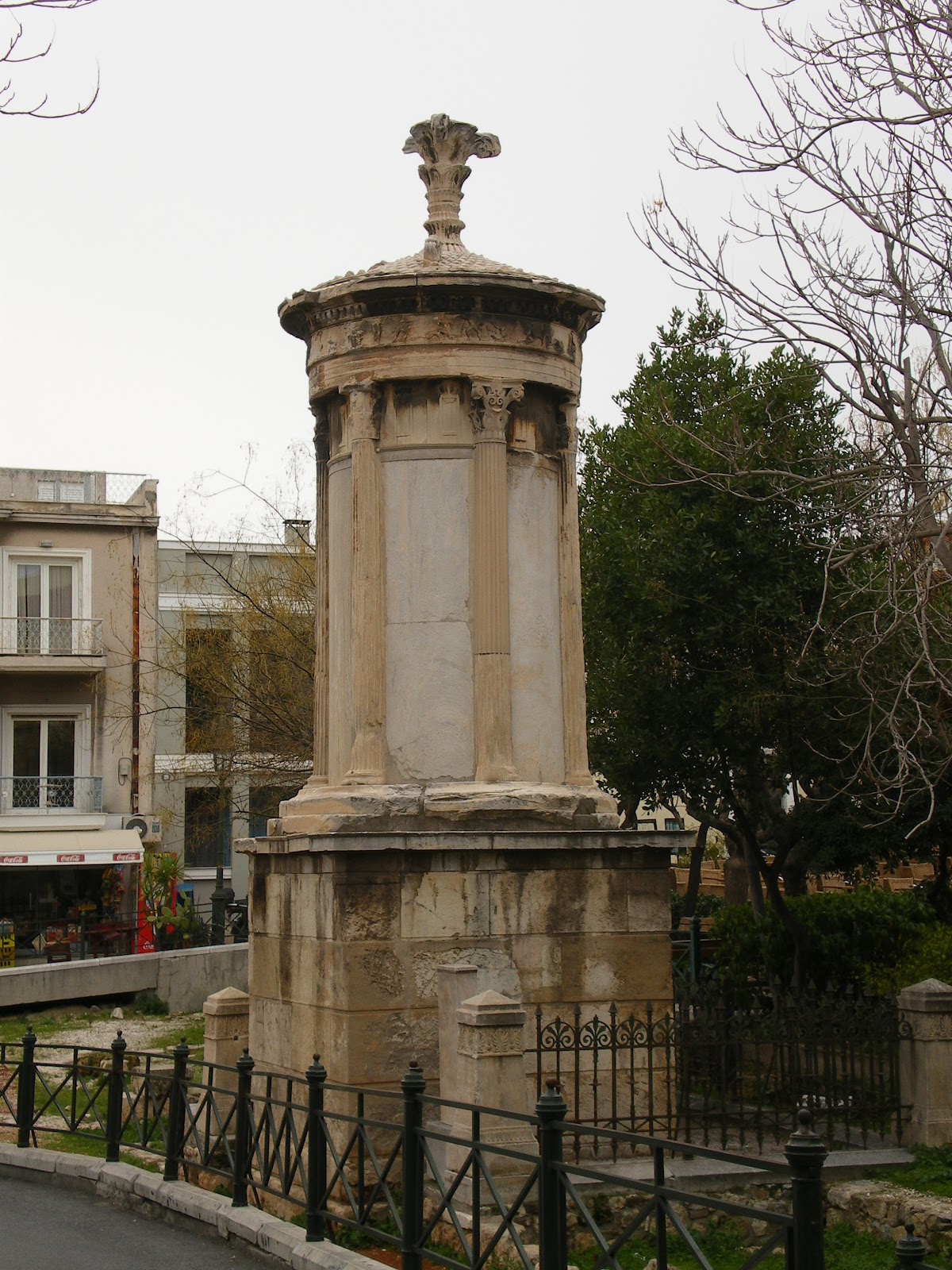 The Choragic Monument of Lysicrates near the Acropolis of Athens was erected by the choregos Lysicrates, a wealthy patron of musical performances in the Theater of Dionysus, to commemorate the award of first prize in 335/334 BCE to one of the performances he had sponsored. The choregos was the sponsor who paid for and supervised the training of the dramatic dance-chorus.

The monument is known as the first use of the Corinthian order on the exterior of a building. It has been reproduced widely in modern monuments and building elements.

The circular structure, raised on a high squared podium, is the first Greek monument built in the Corinthian order on its exterior. It was originally crowned with an elaborate floral support for the bronze tripod that was the prize Lysicrates' chorus won. Its frieze sculptures depict episodes from the myth of Dionysus, the god whose rites developed into Greek theatre.[1] It stands now in its little garden on the Tripodon Street ("Street of the Tripods"), which follows the line of the ancient street of the name, which led to the Theater of Dionysus and was once lined with choragic monuments, of which foundations were discovered in excavations during the 1980s.

Original Corinthian capital from the Monument of Lysicrates in Athens 335 BC.

In 1658, a French Capuchin monastery was founded by the site; in 1669 the monastery succeeded in purchasing the monument, then being called the "Lantern of Demosthenes".[2] It was also called "Lantern of Diogenes". A reading of its inscription by Jacob Spon established its original purpose.[3] The young British architects James "Athenian" Stuart and Nicholas Revett published the first measured drawings of the monument in their Antiquities of Athens, London 1762. The monument became famous in France and England through engravings of it, and "improved" versions became eye-catching features in several English landscape gardens. Lord Byron stayed at the monastery during his second visit to Greece. In 1818, friar Francis planted in its gardens the first tomato plants in Greece. In 1821 the convent, which had enclosed the monument, used as a storage for books, was burned during the Ottoman occupation of Athens, and subsequently demolished, and the monument was inadvertently exposed to the weather.[4] In 1829, the monksoffered the structure to an Englishman on tour, but it proved to be too cumbersome to disassemble and ship. Lord Elgin negotiated unsuccessfully for the monument, by then an icon in the Greek Revival.

French archaeologists cleared the rubble from the half-buried monument and searched the area for missing architectural parts. In 1876–1887, the architects François Boulanger and E. Loviot supervised a restoration under the auspices of the French government.