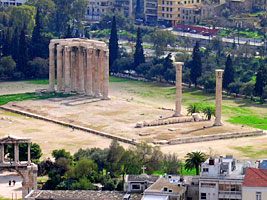 The Temple of Olympian Zeus (also known as the Olympieion), is a colossal ruined temple in the centre of Athens that was dedicated to Zeus, the king of the Olympian gods.

Its construction began in the 6th century BC during the rule of the Athenian tyrant Peisistratus, but it was not completed until the reign of the Roman Emperor Hadrian in the 2nd century AD, 650 years after the project had begun.

During the Roman periods it was renowned as the largest temple in Greece and housed one of the largest cult statues in the ancient world.

The temple's glory was short lived, as it fell into disuse after being pillaged in a Herulians invasion in the 3rd century AD. It was probably never repaired and was reduced to ruins thereafter. 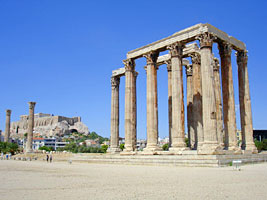 In the centuries after the fall of the Roman Empire, the temple was extensively quarried for building materials to supply building projects elsewhere in the city. Despite this, substantial remains remain visible today and it continues to be a major tourist attraction.

The temple was excavated in 1889-1896 by Francis Penrose of the British School in Athens (who also played a leading role in the restoration of the Parthenon), in 1922 by the German archaeologist Gabriel Welter and in the 1960s by Greek archaeologists led by Ioannes Travlos.

Fifteen columns remain standing today and a sixteenth column lies on the ground where it fell during a storm in 1852. Nothing remains of the cella or the great statue that it once housed.

The temple, along with the surrounding ruins of other ancient structures, is a historical precinct administered by Ephorate of Antiquites of the Greek Interior Ministry.

Nearby is the Arch of Hadrian, a momentual gateway resembling, that spanned an ancient road from the center of Athens to the complex of structures on the eastern side of the city that included the Temple of Olympian Zeus.

It has been proposed that the arch was built to celebrate the arrival of the Roman Emperor Hadrian and to honor him for his many benefactions to the city, on the occasion of the dedication of the nearby temple complex in 131 or 132 AD.

There were two inscriptions on the arch, facing in opposite directions, naming both Theseus and Hadrian as founders of Athens: on one side “This is Athens, city of Theseus”

and on the other side “This is the city of Hadrian, not of Theseus”.

While it is clear that the inscriptions honor Hadrian, it is uncertain whether they refer to the city as a whole or to the city in two parts: one old and one new.

The early idea, however, that the arch marked the line of the ancient city wall, and thus the division between the old and the new regions of the city, has been shown to be false by further excavation.

The entire monument is made of Pentelic marble, that was used for the Parthenon and many other notable structures in Athens, although its quality can vary significantly.The arch was constructed without cement or mortar from solid marble, using clamps to connect the cut stones. It is 18m high, 13.5m wide, and 2.3m in depth. Its design is fully symmetrical from front to back and side to side.

It has been proposed that there were statues positioned on top of the lower level, on either side of the central, aediculum-like, niche of the upper level, as was common for this architectural form; Theseus and Hadrian are the most commonly advanced candidates for these two statues, based on the inscriptions.

You may also visit the temple of Olympian Zeus and the Hadrian Arch , exceptional findings of the ancient civilization in the city of Athens, along with other sites in Athens, riding on Athens Happy Train!