Zappeion Hall is a beautiful neoclassical building with Corinthian portico, currently being used as a Conference and Exhibition Center for both public and private purposes.

Zappeion Hall was founded by Mr. Evangelos Zappas in the 19th century, in order to revive ancient greek ceremonies and contests together with exhibitions. This is the reason why it was build as near as possible to the Panathinaic Stadium.

At that time the architect Anastasios Theophilas was called upon to amend the initial design of Francois Boulanger. After some delays, the cornerstone was laid on January 20th,1874. In the mid- 1880s, Konstantinos Zappas (cousin of E. Zappas) assigned the Danish architect Theophil Hansen to create a new design, even if it meant sacrificing the walls that had already been built.

The building was eventually inaugurated with all due pomp on October 20th,1888.

Its architecture is in the neoclassical order, with a Corinthian portico, and an organization of spaces that is fully in harmony with the purpose for which it was built. This building, the three-arched stone bridge over the Ilissus River that had been repaired, also at the expense of Evangelis Zappas, and the surrounding gardens give us a charming picture of Athens in the early 20th century.

The gardens of Zappeion Hall 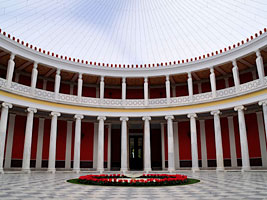 In front of the Zappeion Hall is the Zappeion Gardens, a mixture of French and English style gardens. An area full of plants with paved areas for relaxing walks and courtyards for unlimited reading.

For the Olympic Games

Becoming a part of the Ε.U.

A number of historical events have taken place at the Zappeion, including the signing of the documents formalizing Greece's accession to the European Union on 1 January 1981, which took place in the building's marble-clad, peristyle main atrium.

Unfortunately for its benefactor, Evangelos Zappas, he did not live long enough to see the Zappeion built, and his cousin Konstantinos Zappas was nominated by E. Zappas to complete the building. The head of Evangelos Zappas is buried underneath his statue which is located just outside the Zappeion.

Take part into a historic flashback, through the most important details in the story of the Zappeion Hall and its magnificent gardens. One of the most prestigious and well preserved sites in Athens. Its architecture is a tribute to ancient greek monuments. How, you ask? By touring the historical centre of Athens by train, of course! Our train!