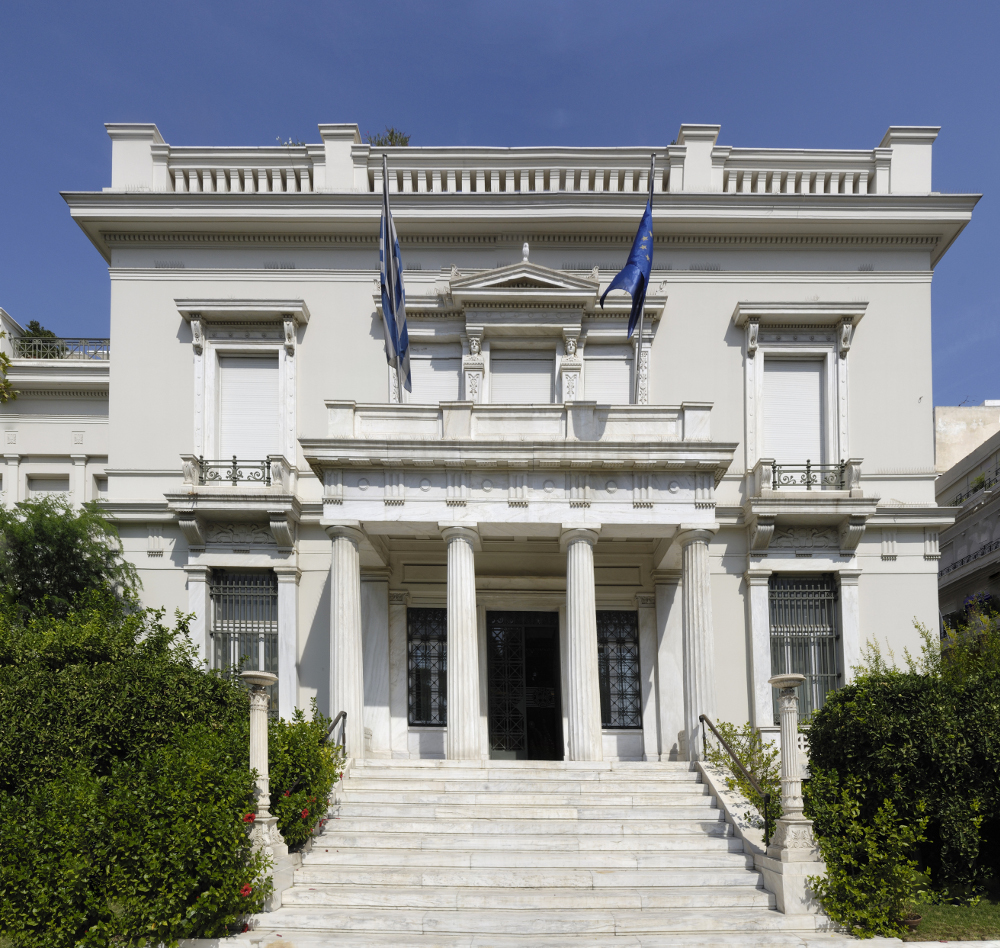 One of the leading museums in Athens, the Benaki Museum is well worth a visit. It was founded by patrician Antonis Benakis (1873-1954) and inaugurated in 1931. The central, older building, at Koumbari Street in Kolonaki, is among the most impressive neoclassical buildings of Athens. It was built in stages from 1910 to 1931. Formerly the residence of Antonis Benakis, since 1931 it houses the more than 45,000 Museum exhibits of the collection of Antonis Benakis and other donors, organised in six collections.

Greece at the Benaki Museum: This group of collections comprises of several categories totaling more than 40,000 items, illustrating the character of the Greek world through a historical panorama: from antiquity and the age of Roman domination to the medieval Byzantine period; from the fall of Constantinople (1453) and the centuries of Frankish and Ottoman occupation to the outbreak of the struggle for independence in 1821; and from the formation of the modern state of Greece (1830) down to 1922, the year in which the Asia Minor disaster took place.

The collection of Prehistoric, Ancient Greek and Roman antiquities which is formed through the contributions of several Greek and foreign donors, as well as from the reserves of other museums, covers a vast chronological period stretching from the dawn of prehistory to the end of the Roman era.

The Byzantine collection links the ancient Greek world to that of modern Greece. The collection is exceptionally rich, although it is not representative of all the different artistic tendencies and currents which flourished during the thousand-year Byzantine Empire, and is divided into two groups. The first group comprises bronze and silver household and ecclesiastical vessels, miniature sculptures and enamels, ceramics, manuscripts, etc., many of outstanding quality and workmanship. The second group includes Byzantine and post-Byzantine icons, through which the evolution and development of iconography from the Byzantine period and the Palaeologan renaissance can be traced in the workshops of Crete and the artistic production of Mount Athos, up to the early stages of the modern Greek painterly tradition.

A number of household vessels from the early Byzantine period (4th to 7th centuries AD) help to create a picture of the domestic surroundings of late antiquity. The rich selection of lamps and chandeliers is also of special interest. The important collection of decorative silver plates dating from the late 6th and early 7th century clearly preserves the subject matter of the artistic tradition of Greco-Roman antiquity and the manner of depicting the human figure. The Museum's collection of ceramic platters likewise offers a rich selection of decorative themes. Several ecclesiastical vessels, censers and chalices, dating to the early Byzantine period, as well as other groups of objects such as matrices, tools and measuring instruments, cast light on contemporaneous trade, crafts and scientific advances. The entrancing collection of Byzantine jewelry presents an obvious continuation of Roman forms and techniques, including golden necklaces and earrings set with sapphires, amethysts, emeralds and pearls, and exquisitely worked bracelets and rings decorated with Christian emblems. A large group of crosses, reliquaries, amulets and miniature steatite icons are indicative of the rich production of small-scale works of art in Byzantium. A number of superb censers and processional crosses are representative of ecclesiastical vessels and furnishings of the middle and late Byzantine periods. Finally, it is worth noting that the general public has always reserved its greatest affection for the Benaki Museum's collection of Byzantine and post-Byzantine icons.

Post-Byzantine and Neo-Hellenic art: The collections of ecclesiastical and secular art cover the historical period from the 15th to the 19th century and provide evidence of the high level of culture in the Greek world during the Frankish and Ottoman occupations.

Historical heirlooms: The collection of historical heirlooms recreates the history of modern Greece from the end of the 18th century onward. Many of the objects in the collection are family heirlooms donated by the descendants and relatives of individuals who are intimately connected with the history of modern Greece. A number of the more important items are connected with the Philhellenic movement and the struggle for Greek independence, as well as with Ioannis Kapodistrias' attempts to create a modern Greek state (1828-1831). Others date to the reigns of King Othon (1833-1862) and King George I (1863-1913). The contents of the collection also reflect the complex and laborious processes that were required to bring about the liberation of the Greek populations living under Turkish rule and the formation of a distinct national identity, such as the Macedonian struggle, the reforms of Eleftherios Venizelos, and the Asia Minor disaster of 1922. This collection includes swords and other weapons which belonged to the heroes of 1821, battle standards from the War of Independence, nautical instruments such as Laskarina Bouboulina's telescope and Andreas Miaoulis’s compass, personal belongings such as Ioannis Kapodistrias’s seal and Lord Byron's pistols, manuscripts written by the poets Dionysios Solomos, C.P. Cavafy, Kostis Palamas, Angelos Sikelianos, Kostas Karyotakis and Yannis Ritsos, and the Nobel prize certificates and gold medals won by the poets George Seferis and Odysseus Elytis.