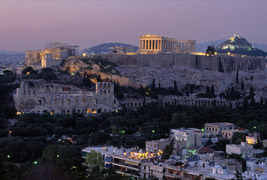 Athens is the capital and largest city of Greece, dominates the Attica periphery as one of the world's oldest cities, its recorded history spans at least 3,000 years. A bustling and cosmopolitan metropolis, Athens is central to economic, financial, industrial, political and cultural life in Greece and a leading business centre in the European Union.

Classical Athens was a powerful city-state. A centre for the arts, learning and philosophy, home of Plato's Academy and Aristotle's Lyceum, Athens was also the birthplace of Socrates, Pericles, Sophocles and its many other prominent philosophers, writers and politicians of the ancient world. It is widely referred to as the Cradle of Western civilization and the Birthplace of Democracy, largely due to the impact of its cultural and political achievements during the 5th and 4th centuries BC on the rest of the then known European continent.

The heritage of the classical era is still evident in the city, represented by a number of ancient monuments and works of art, the most famous of all being the Parthenon on the Acropolis, widely considered a key landmark of early Western civilization. The city also retains a vast variety of Roman, Byzantine and Ottoman monuments, projecting the city's long history across the centuries.

Landmarks of the modern era are also present, dating back to 1830 (the establishment of the independent Greek state), and taking in the Greek Parliament (19th century) and the Athens Trilogy (Library, University, and Academy). Athens was the host city of the first modern-day Olympic Games in 1896, and 108 years later it welcomed home the 2004 Summer Olympics, with great success.

Start your ride on Athens Happy Train (the hop on hop off train of Athens),  getting on at the starting point on Ermou Street. You may also get on at any stop along the route, such as Monastirali, Plaka or the Monument of the Unknown Soldier. See the most beautiful sites, which are also the most important destinations in Athens, in a brief field trip throughout the historical centre of the city.
Consult the map on the home page, for more information regarding the various stops along the route of our happy train!